Renault V8 engine screaming hard, the RB9 crests the rise out of Turn 2. Seventh gear at 285km/h and the blue, purple and yellow charger flicks left into Turn 3; a fast, constant-radius, slightly downhill right is up next. Keeping his foot hard on the loud pedal for as long as he dares, the driver changes down one cog and spears left into Turn 5, grabbing some apex kerb. The Pirelli P Zeros squidge into the Tarmac as downforce pressures keep the Red Bull pinned to the road, the engine firing roughly in this off-accelerator turn as the diffuser-blowing exhaust gases work their coanda-effect magic.

Back on the power, steering wheel opening into the long, right-handed Turn 6, and this wonderful section of track – in no more than three point eight seconds – is done. Mark Webber and his ride disappear away into the distance.

Saturday early afternoon at the Circuit of the Americas (COTA) and Q3 is about to commence. With the sun hiding behind a blanket of grey cloud, I take a view. I’m going to spectate. Any sense of guilt at putting my cameras down is eased significantly by a forecast of sunny and clear skies for Sunday’s race.

Choosing a driver’s view through the corners, I position myself at the entrance to Turn 3, my line of sight dead level with the ribbon of road that’s so interesting to behold. Switching from left to right to left and right again and bordered with red, white and blue stripes, this ‘S’ section of track is reminiscent of Silverstone’s Maggotts/Becketts complex but gets nowhere near the credit it deserves as a place to see jaw-dropping Formula 1 performance.

At such places one can really appreciate the difference in car and driver performance as man and machine swerve from this way to that at such high-G-loaded speeds.

A flash of blue and white and Williams’s Finnish young gun Valtteri Bottas is on a quick lap. Smooth and fast as he blasts through three and four, marginally late off the power into five, he’s got ‘push’ at the front end. Understeer quickly turns to oversteer as the front tyres grip again, unsettling the rear. In a millisecond the Finn corrects his unbalanced car and turns in to corner six. Next time through he’s learnt from his mistake, F1’s newest ‘flying Finn’ impressing ever more.

A Ferrari V8 howls past but not in a scarlet machine. The Sauber C32 of Nico Hulkenberg swerves from apex to apex, body rolling as steering input and lateral loads work the suspension hard. The Swiss team’s traditionally ‘soft’ chassis looks difficult to drive, the left-right-left-right flow of the corners creating a pendulum-like motion that seems at odds with almost every other quick car. Clever rear-end aero and an effective exhaust-blown diffuser seemingly mitigate any mechanical shortcomings.

Hulkenberg – quick as he undoubtedly is – consistently struggles with the final element of this section. A tad too late off the power into five, he induces excessive roll, oversteer, a rear-end slide and therefore an unsettled approach to six. Surprisingly, perhaps, Nico’s Mexican team-mate Esteban Gutierrez looks way better here.

Quickly it becomes apparent that the key to a quick time through this area of the first sector is how late a driver can keep his foot hard on the power pedal as he approaches Turn 5. It’s here that the quick cars and drivers appear to make most time. Of course the limitations of the various cars make for difficult comparisons, but when two drivers – in the same car – are compared, subtleties in style, commitment and natural ability really show.

Romain Grosjean is particularly impressive, continuing an incredible turnaround in performance and reputation from his wayward 2012 campaign. Very fast in his line through three and four, the ever-cheerful Frenchman works his Lotus E21 beautifully through five, very late to lift from the accelerator while showing lovely feel for the car as he hooks the apex of five and powers into six.

Of course there’s no surprise which car looks the quickest of the quick. Red Bull’s RB9 displays the extraordinary levels of speed, balance, downforce and direction-change that we have become so used to seeing. As often as we do marvel at just how fast this latest Newey road rocket eats up racetracks, we should all try – hard as it may be for many – to enjoy the spectacle.

The Australian really does look peerless as he guides his ride through the switchback of three, four and five. Wonderfully quick and consistent, Mark’s approach, speed and line through the last of these three corners in particular is a joy to behold.

Studying Webber’s throttle, steering and speed telemetry traces –while sitting in the pit box between Q2 and Q3 – Vettel must be well aware of just how much quicker in this most challenging run of corners Webber is proving to be. The German’s unsettled car and loss of speed in Turn 5 on his opening Q3 lap shows without doubt just how much he is pushing to outdo his teammate.

It’s in the slower Sector 3 where Sebastian gains all his advantage, because even as he clocks up pole position he hasn’t matched Webber’s speed through the really exciting part of the COTA lap.

Small consolation for the Australian but no doubt pleasing all the same.

I’m paid to take pictures of grand prix cars, so putting my cameras down during a session is rare indeed. This time, though, I think I can be forgiven… 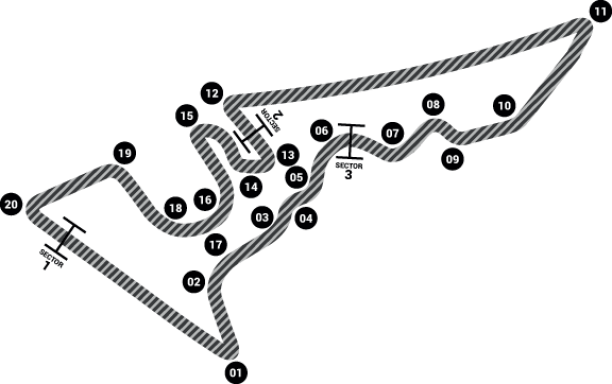